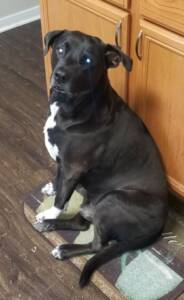 
I rescued Bambam from the side of the road in July 2013 when he was an estimated 6 mos. old. We have had him for the last 8 yrs. He's grown up with my husband, me, our 2 (now teenage) boys, and a female chihuahua. While not 100% certain, my best guess is that he's a black lab mixed with pitbull. He is black with white markings, approx. 60 lbs., unneutered male. He knows the commands of sit, lay down, and paw. He willingly gets in the bathtub when offered a treat to get in. He has no known medical problems, got his most recent vaccinations in Jan. 2021. He is an inside dog that has slept either on our bed or on the floor next to our bed. He is house trained. The only behavior problem I have observed is: while on walks, he'll lunge toward a cat, but only to the end of his leash, then he just stares at the cat until we walk past it. He doesn't pull on the leash or drag me while walking and he's never actually tried to hurt a cat.

Three years ago, we adopted 2 male chihuahuas. For the first 2 yrs, Bambam got along great with all 3 of the other dogs. But about a year ago, he started getting aggressive toward our other 2 male dogs. Now he growls at the 2 males and has bitten one of them 4 different times. So, for the safety of the 2 male chihuahuas, we are trying to find Bambam a more suitable home.

Ideally, I think Bambam would do well as an only dog or in a home with only female dogs. He does well with either a single person or with a whole family, including children. Bambam loves going for walks (long or short), chewing on sticks while laying in the sun, to be petted or brushed (any attention really) and treats. He has a real laid-back personality. Even though he's considered a "senior" dog, he is in very good health with a lot of life left in him. Bambam has been a very good boy all these years. He is Loyal, Loving, Friendly, Smart, Protective, Calm, and Well Behaved. He is very obedient and attentive.


We had Bambam and a female dog for 6 yrs w/ no problems. Then, 3 yrs ago, we adopted 2 male chihuahuas. All the dogs got along great for the first couple yrs, but 1 year ago, Bambam started becoming jealous and hostile toward the other male dogs. He growls at them and he's bit one of them 4 different times. So, for the safety of the other male dogs, I am hoping to find Bambam a more suitable home. 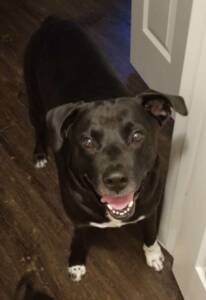