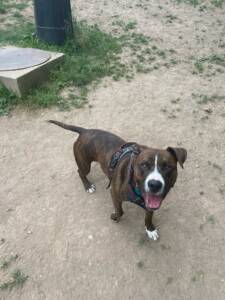 
We adopted Frankie in January 2021, off a pet rescue website. From the moment he met our family he has been completely loving and loyal. He loves to play and loves to cuddle. He is healthy (up to date with shots), house trained, and knows basic commands (sit, stay). Crate trained also (but not his favorite thing). He weighs ~60 lbs.

We also have two other dogs who are much smaller and older than Frankie. Even though he outweighs them by 3x he has always been good with them, even to the point of being submissive to his "big" sisters.

The problem is that his loyalty to our family also expresses itself as being our protector, as he considers anything/anyone not from our household to be a threat. We live in Brighton, with constant activity on our street and in close proximity to neighbors. We're worried about the risk of what could potentially happen if he accidentally got out of our yard. His charging at the fence when neighbors are in their backyard has made them fearful of being on their own property.

This has been a difficult decision, but we've finally recognized that we are not the right home for Frankie. He really needs a home without neighbors in close proximity. I have no doubt that he'll take to a new family, just as he's taken to ours.

He's never been the slightest bit aggressive with any member of our family, but he did once bite a family friend who entered our home unannounced. When she entered, Frankie started barking at her and when she extended her hand towards him, he bit her arm (we started keeping the door locked after that). I believe he only bit her because she extended her arm. On an earlier occasion a friend of our daughter entered the house unannounced and Frankie started barking at her also. She kept her hands raised and he never touched her.

While being walked he doesn't display aggression when he sees other other dogs, but I try to avoid them as a precaution.

All I'm saying is that Frankie behaves very predictably...he sees people he doesn't know as a potential threat, but he only bites if they do something he perceives as aggressive...he's not out for blood.

Anyway, we hope to find him an appropriate home where Frankie will be well cared for. I'm willing to drive him to meet perspective families at your own home, where he likely won't be territorial. Willing to provide leash, harness, crate, etc.


Frankie is too territorial for life in the burbs. He's threatening to our neighbors and their pets and we're worried about what may happen if gets out of our yard. 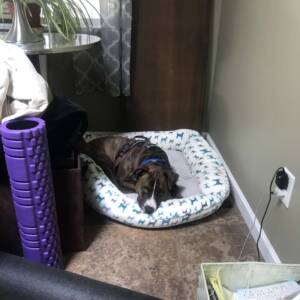 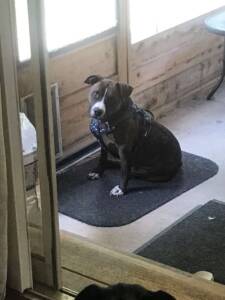