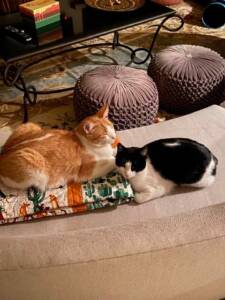 Max: Max has a great personality! Everyone that comes to my house loves Max. He can be shy, but in no time he needs love and affection. He's really expressive with his tail and bunting. You'll know he likes you because he'll swipe you with his tail a lot. He naps with my six year old, he will run down the hallway and playfully swipe at me (no claws!) to get my attention, but he has never scratched anyone and believe me when I say that I can do pretty much whatever I want to him. I call it "lovingly torture" but I'm always putting my face in his face and when they grew out of the kitten stage he has never scratched me. Max does like to challenge authority, but it's pretty cute. Right now, Max sleeps all day and is out at night. He is an amazing hunter. He's caught 2 hummingbirds so far, a pigeon, tons of mice and lizards. If you are looking to get rid of a mouse problem, he's your guy. He is healthy, has had no sick trips to the vet, you can touch his paws easily if you want to cut his claws, and he's very easy going. The only thing is he doesn't liked to be picked up and held like a baby. I've tried and after a year he seems to be resisting a bit less, so maybe over time you can get him to. Max is great with all genders, but he has a special place in his heart for the males. He challenges me a lot (and really I mean playfully) but he melts with my husband. He's a guys guy.

Miranda is quite the opposite. Though she's playful, fun and more energetic than her brother, she is shy shy shy! If anyone comes into the house that she doesn't know I won't see her for half the day. She has never bitten or scratched anyone in anger. This is the cat for the person who's home doesn't have a lot of people coming and going all the time, maybe more of a homebody. She is a vocal cat. She loves attention, but like her brother, she doesn't like to be picked up, but if you're sitting on the couch or the floor, she'll come up to you and let you pet her until your arm gets tired. She is healthy, has had no sick trips to the vet, is spayed (or neutered, I never remember which is for the girl or boy) as is her brother, but has never had a vaccine. I'm terrified of shots and I can't do it to the cats.

Both of them are very clean. Max is not as good as her sister at taking care of himself, but we've had no issues. They have NEVER, I mean it, had an accident outside the kitty litter. You show them the litter once and they know where to go. They don't have any dietary issues. Really, they are easy cats. The first 3-4 days will be hard. Lots of hiding, but then they will fit right into your life. I have them outside, inside, I have never had a flea issue or found a single tick on them. They don't seem to have allergies. They love to be outside. Miranda can handle the heat, Max is not a fan. He likes to go out around 6pm when the sun isn't blazing.

When I first received Max and Miranda, I talked in a very low, calm voice and gave them a ton of treats and within 2 days they were good with me. Now, for those who want cats that cuddle ALL the time, these are not your guys. I wanted them to be more independent, but when I am ready to play, so are they. They LOVE toys. Max will proudly carry around a stuffed animal and Miranda likes to bring in a cicada every once in a while and have fun chasing it around the room. We have trained them not to jump up on counter tops. Oh and the best part!!! They are not interested in human food. I have tried to give them Salmon, tuna, burger meat..nope, they turn their nose. They are quite picky eaters, but they will definitely eat if they are hungry and just every once in a while I'll change up their wet food cause I just think they get bored of it.

I hope you liked the intro to Max and Miranda. Some really great cats!


I have quite suddenly accepted a job in Romania. I leave at the end of August and these two (orange and white male and black and white female) need some help. They can be very shy until they get to know you and though they are spayed they are not vaccinated. I also thought a 2 hour ride to the airport, 11 hour flight to Munich, 2 hour flight to Cluj and then 2 hour flight to my apartment (where no pets are allowed) would be quite traumatizing for them. My sister rescued them and gave them to me because she already had too many cats and I can't take them with me. Please help! Personally, I am willing to waive the re-homing fee if they go to a good home. 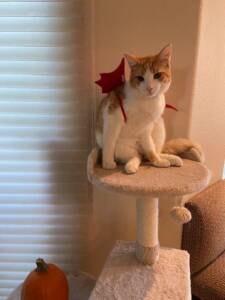 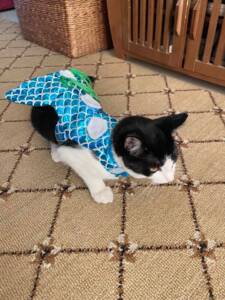 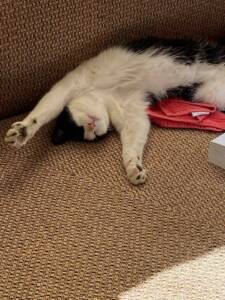 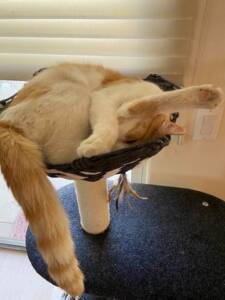