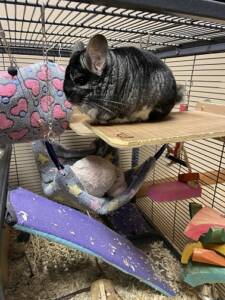 
Milly was bought from a Petco in Easton, PA when she was roughly 7 months old. She was bought as a companion for my other 5yr old chinchilla but after hearing horror stories about chinchillas who were caged together for years getting in fights and one ending up dead I was too scared to officially merge cages. Milly is your typical young chinchilla; which is the equivalent of a moody teenager for those that don't know. She is very vocal and takes more socialization than normal to bond.

Due to my employment at this time I unfortunately do not have the needed time to provide adequate socialization to both my girls. It saddens me to have to consider re-homing Milly but I know it is best for her to go to a family that is able to provide her the amount of attention she requires to properly bond.

Be warned: Milly is nice; she has NEVER attempted to bite but; her first defense when scared is to pee...on/at you. This is a chinchillas go to defense when it is scared or uncertain about something. Once she has been provided the proper attention and bonded this behavior should slowly dissipate and eventually disappear altogether.

I prefer for Milly to go to a home familiar with chinchillas as they are a very particular pet; they require a certain humidity level range and cannot be in temperatures >71F. An air conditioned room or central air controlled room is required.

Chinchillas do not require vaccines and they cannot be spayed/neutered as the surgery would kill them. They only require a yearly check-up unless they become ill or get injured. Her first check-up was in April/May and she was a picture of good health. *Please note that chinchillas require an exotic pet vet* Chinchillas are like cats...they are VERY good at hiding when they are sick. Be on the lookout for decreased activity, excessive tiredness, changes in poop/urination; and decreased food/water intake.

Chinchillas should not be kept around other uncaged pets as this increases their anxiety. Chinchillas are NOT a pet for small children or children who are not responsible enough to care for them properly.

Their main source of food is timothy hay (which Milly absolutely devours) and they also eat pellets. I purchase all of Milly's necessary products from chewy (all main food sources are OxBow Essentials). Chinchilla treats should be kept to a minimum and they should have very limited amounts of added sugars; really none or very rarely. I provide them treats from chewy that are a mix of timothy hay/fruit/foliage. Treats like raisins should be given far and few between (1-2 per week) but they are also not required at all. Chinchillas should NOT be treated like Guinea pigs, they are not guinea pigs...Do not feed them food scraps. I do provide her with a chinchilla approved "Crunch stick" every 2 weeks.

Chinchillas need plenty of things to chew on; this can include apple sticks (I give her 12-15 per week) and any approved wooded (non-chemical/non-painted) material. Chinchillas should not have ANY access to plastic; they will chew anything and everything they can and plastic is very harmful to their digestive track.

Included with the rehoming fee is: 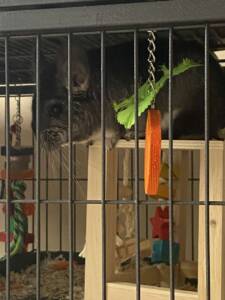 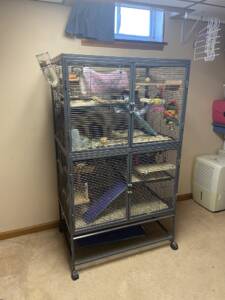 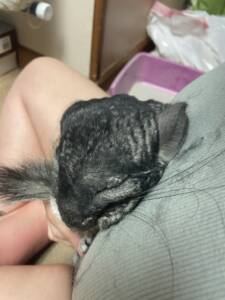 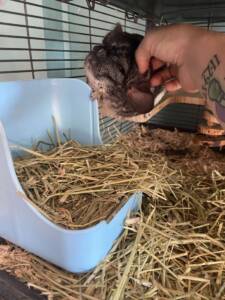 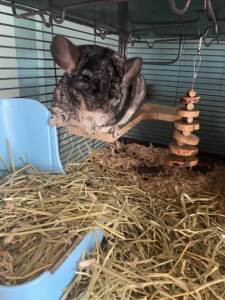