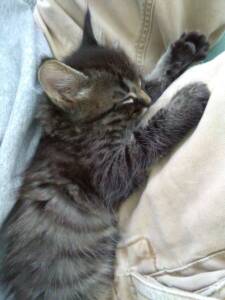 
Rooster is a very sweet kitten. At the moment he's close to six weeks old. His Mom gave birth to six kittens. And, he's very sweet and huggable. I recall one of the first times he sat on my lap. And, he was just laying on my lap for what seemed like forever!!!! And, he was gazing into my eyes for pretty much the whole time!!!! So, he has a very sweet, relaxed personality. He's also very soft and huggable. He's a sweet kitten!!!!


There was a feral cat that was began hanging out at my Mom's house. And, we noticed that she was going back and forth between our neighborhood and a park that's adjacent to our neighborhood. And, my Mom eventually began calling this cat "Kevin," even though she wasn't a male!! But, we would walk out on the front porch and she would often meow at us. So, we weren't really sure what the situation was. But, she didn't seem to have an owner. So, we began feeding her. And, eventually we noticed that she was getting larger and larger. So, we realized that she was pregnant!!

So, she eventually gave birth to six kittens!! And, we realized that it would probably be pretty difficult for us to raise six kittens. So, we decided to try and find some new homes fore the kittens!! 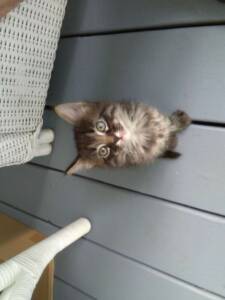