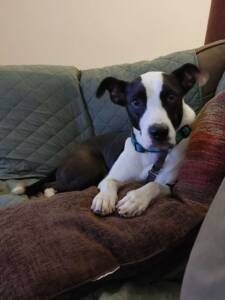 
Tango was born in Puerto Rico, he is 3 and a half years old. When Puerto Rico was decimated by the last huge hurricane many dogs were left without homes. Whole search and rescues began for survivors there were also attempts to rescue pets. Tango was found chained to a post in the back yard of a home and severely mal- nourished  with clear signs of physical abuse. Tango was flown to the states where he began his recovery journey. Fast forward, I was looking for a dog and Tango caught my eye. He was scared and trembling but when he saw my son his tail wagged and he was more confident to approach us. That same day I took him home (the shelter also seemed dirty and lacking in staff and just care for the dogs) He has been a part of the family for 1 year and a half and me and my son enjoy his company and love. It was hard in the beginning due to Tango's past of trauma but he has come a long way, he truly is a big mush. Tango has never ever shown any sign of aggression toward people, he loves belly rubs, running around in the park and playing with the kids. Tango still has some moments where he is scared, for example, when reaching in to rub Tango I have to be mindful of how fast I move because he thinks he will be hit but again that's only sometimes. He is crate trained, loves sitting in the passenger seat in the car( I use a dog seat cover obviously) enjoys the sand when he comes to the beach with us and just in general enjoys being around good people.  Here is a list of things I will provide with Tangos adoption....

:Copy of his vaccinations


I have a 2yr old, a career , recently became a single father and now about to start school in January. It just is not fair to Tango, he has come a long way from being abused in his old home to being given nothing but love in mine. Tango had some obstacles ahead of him when we adopted him, he was traumatized, never left his kennel and feared being hit when we would reach in to pet him. Now Tango enjoys his dog bed, running in the park, playing with my son and other dogs. Me and my son love him very much but the truth is he deserves a home where there will be as much love as we give him but also where a family would have more time for him. 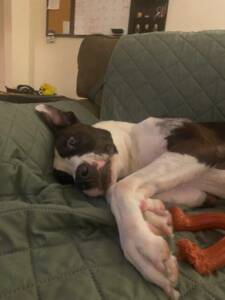 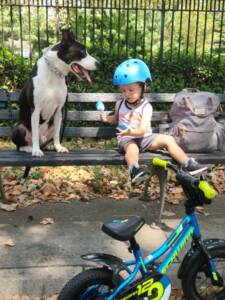