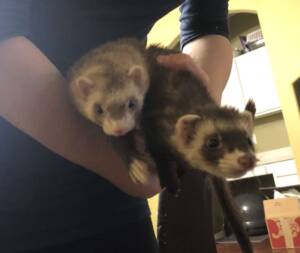 
I have two juvenile bonded ferrets that I took in from some girls living at a local group home. Their presence there was against house rules and in fear that they would be sold to an unfit home or even released, I took them in. They are both Marshall ferrets and were born on March 20th of this year. I have an extensive history with a plethora of animals and was willing to foster them for a little bit, but am in my third trimester of pregnancy and about to begin the journey of being a first time mom. I wanted to help these two little stink angels, but it's not the best time for me to permanently add anyone else to my existing zoo. I named the white one Nixie as she loves burying her entire face and paws into her water bowl. I have yet to name the brown one. They pack a stink like any other ferret, but they're both very sweet and have been very social with my husband and I. They love to play and take naps in their collection of hammocks. Contact me for more information if you are interested in adopting these two little girls! 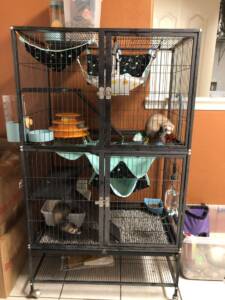