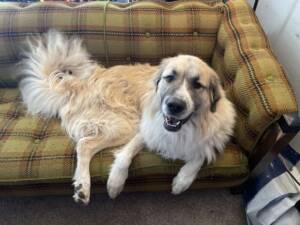 Zuko is mostly a Great Pyrenees pup who has the best temperament, the sweetest smile, and the kindest eyes. He is potty and kennel trained, great with kids, cats, and female dogs (chases kitties but only tries to play with them) and super teachable. He has not been around male dogs so I am unsure how he is with them

He’s a marvelous buddy who loves to be around his people and to run around the yard. He loves to play, but is very laid back and chill as well.

Here are some things that he still needs help working on:

•Chewing. although he’s not a HUGE chewer if he gets bored or human things, such as shoes and cups, are left out, he will chew.

•Barking. Anyone that does research on Great Pyrenees knows that they are known for barking as they were bred to be guard dogs and scare off any predators to livestock. I have heard of being able to train the bark out of them, but I personally have not even tried that with him. Given how smart and ready to please he is, I would not be surprised if he took to ANY kind of training very quickly; my brother taught him to high five in less than 10 minutes!

•Protectiveness. He is supposed to be a loyal and protective puppers, he just needs some guidance and extra training that I have not been able to give him.

The reason I have decided to find a new home for him is because I am simply incapable of being able to give him the BEST, which is what he deserves. I am a bartender with a single house income and I can’t afford to make sure he’s living his healthiest, happiest life. Now, with that being said, he has been well loved and cared for to the best of my ability. Zuko will need to be updated on shots, need a trip to the groomers, and will need to be neutered once he hits that 2 year mark. I will NOT be rehoming him to someone who doesn’t want to neuter him.

I will send his full size kennel and his food bowels, favorite toys etc. along with him to whomever is worthy of my boy.


I can’t afford to provide the healthiest and happiest life for my boy. When I took him in it was extremely last minute and it was to keep him from going to a shelter. Im embarrassed to say I was very much NOT prepared financially or mentally for taking care of a dog. But he had my heart and I wanted to give it my best go. Unfortunately, I have had to admit that he would have a better life with someone who is more stable than myself, both financially and mentally. It breaks my heart to do this, but it breaks my heart more knowing he’s not living his full potentially because of me. 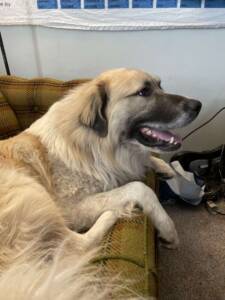